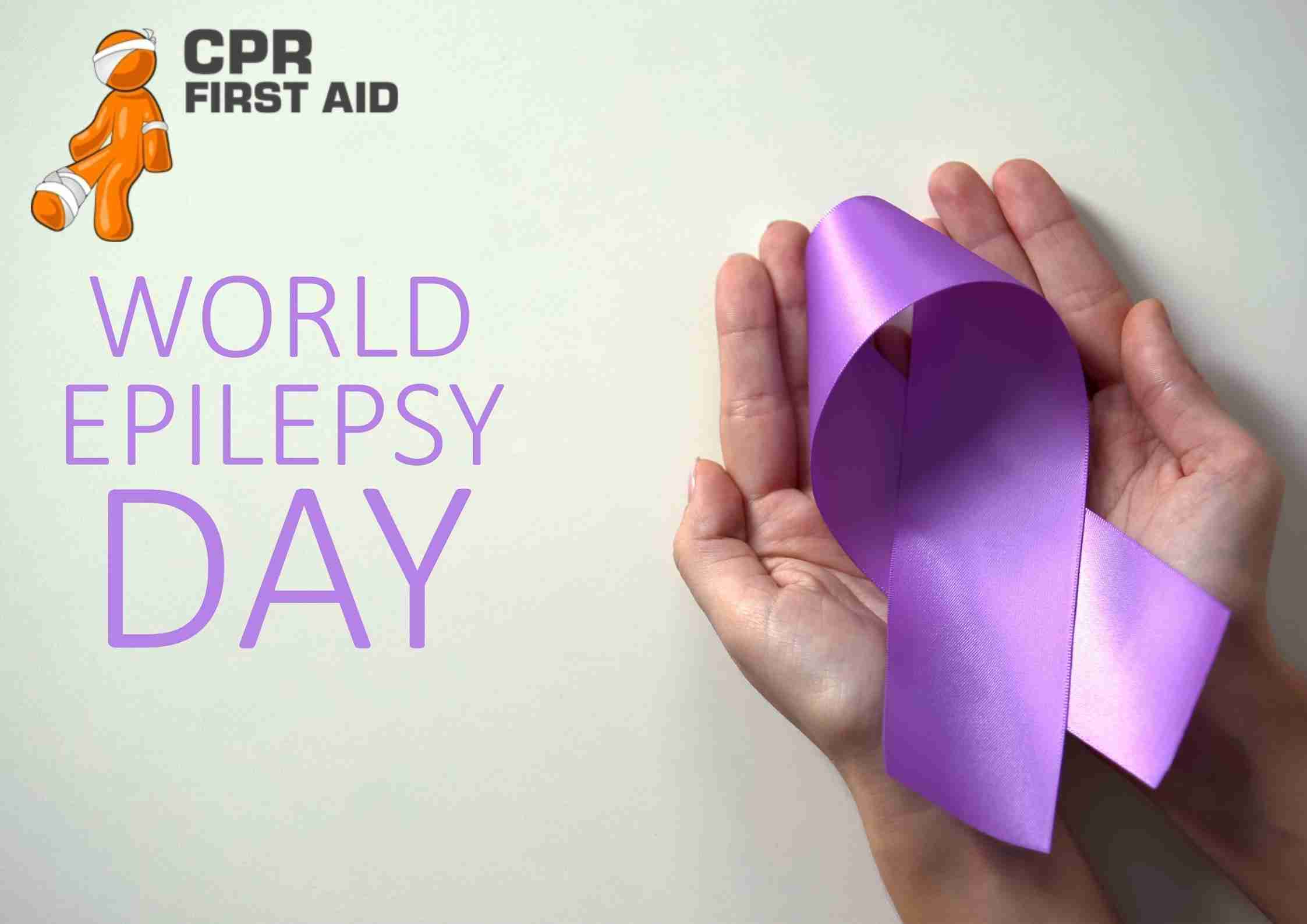 March 26th is World Epilepsy Day, a time to raise awareness about epilepsy and seizures in children. Epilepsy is a neurological disorder that causes seizures. It affects people of all ages, but it is most common in children and young adults. If you are the parent of a child with epilepsy, it is important to learn as much as you can about the condition so that you can provide your child with the best possible care. In this blog post, we will discuss epilepsy in children and what parents need to know on World Epilepsy Day.

Epilepsy is a neurological disorder that causes seizures. Seizures are sudden, uncontrolled bursts of electrical activity in the brain. They can cause a variety of symptoms, including muscle spasms, loss of consciousness, and convulsions. Epilepsy can be caused by a variety of factors, including head injuries, genetic disorders, and infections. It is most common in children and young adults.

What are the symptoms of epilepsy in children?

Epilepsy manifests in a variety of ways, depending on the person. Some people only have minor symptoms, while others may have severe and even deadly seizures. The most prevalent symptom of epilepsy is a seizure. Epileptic seizures can produce a number of additional symptoms, including muscular spasms, loss of consciousness, and convulsions. Epilepsy can also lead to developmental delays, behavioral issues, and learning difficulties.

What causes epilepsy in children?

Epilepsy can be caused by a variety of factors, including head injuries, genetic disorders, and infections. In many cases, the cause of epilepsy is unknown.

How is epilepsy diagnosed in children?

After two or more seizures that were not caused by another medical problem, most people with epilepsy are diagnosed. A seizure must last at least five minutes before it can be classified as epileptic. Doctors will frequently do an EEG (electroencephalogram) to assess electrical activity in the brain to diagnose epilepsy. They may also request blood tests and brain scans if necessary.

What are the treatment options for epilepsy in children?

The most common treatment for epilepsy is medication. Medications can help to control seizures and often improve the quality of life for people with epilepsy. In some cases, surgery may be recommended to remove the part of the brain that is causing the seizures. If your child has epilepsy, it is important to work with a team of doctors to develop a treatment plan that is right for your child.

Focal seizures start in one area of the brain. Focal seizures can be treated with medication or surgery. There are two types one with awareness and one with impaired awareness. Symptoms can be involuntary jerking of a body part or tingling, dizziness. Fiddling of clothes, chewing movements, or uttering unusual sounds.

This is a type of seizure that occurs when someone experiences an unexpected drop in their blood pressure.
Atonic seizures, also known as “drop attacks”, happen because the person’s brain cannot get enough oxygen from its supply – which can lead to brief periods without awareness or control over oneself whatsoever this usually only lasts for about 10 seconds at most though some cases may go up until 3 minutes

Grand Mal seizures are a type of seizure that usually start with muscle contractions and rapidly spread to involve all parts the body. It can cause a sudden loss of consciousness with the child commonly falling to the ground stiffening (tonic phase) and then jerking of the muscles (clonic phase). There can be loss of bladder control or biting of the tongue. They may clench their teeth, go blue or red in the face and saliva or foam may drip from their mouth. The seizure can last from 1-3 mins and once the child regains consciousness they may be confused, drowsy, sleepy or agitated.

Absence seizures, also known as petit mal seizures, are brief periods of staring or daydreaming. They usually last for less than 15 seconds and do not typically cause any physical symptoms. Absence seizures can be treated with medication. 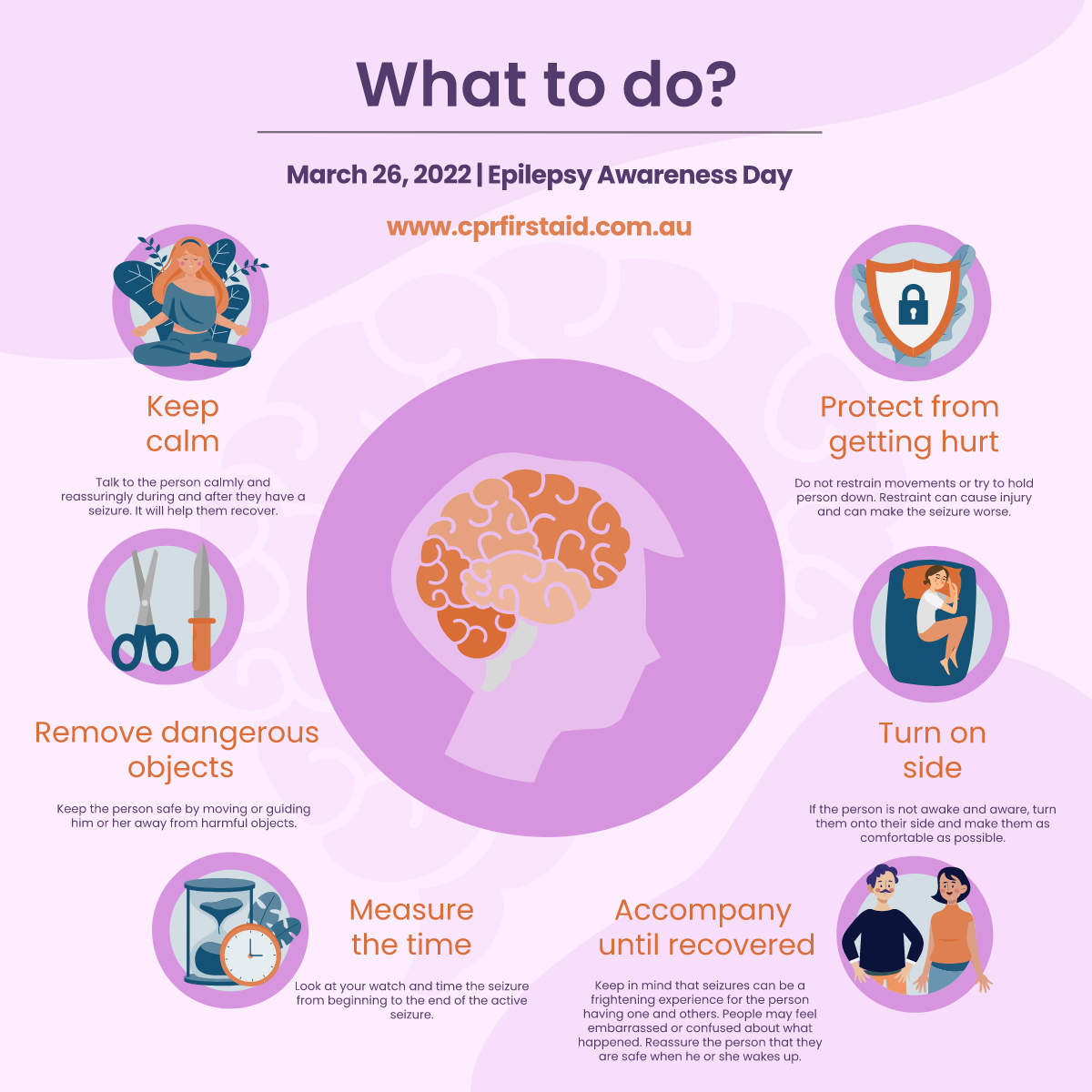 What are the first aid steps for someone having a seizure?

If you see someone having a seizure, it is important to stay calm and follow these steps:

Do not put anything in their mouth 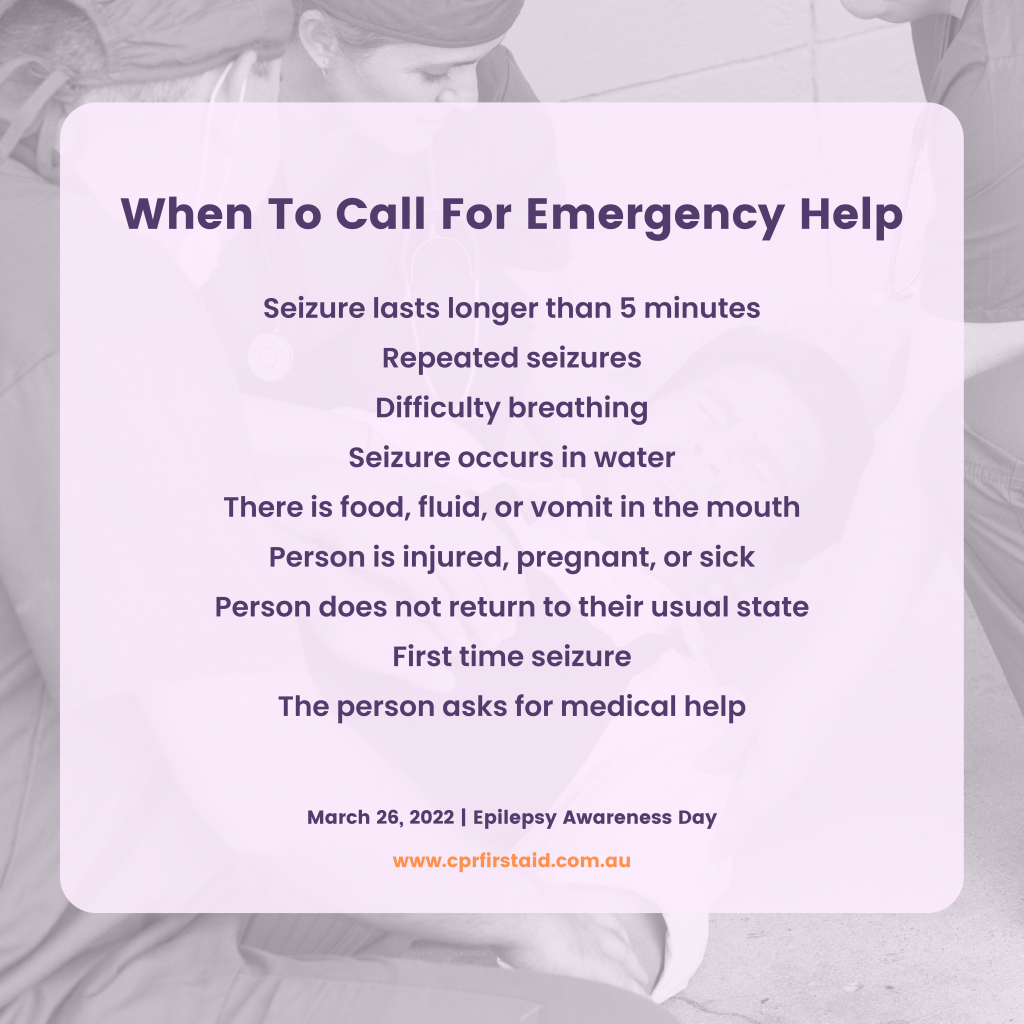 Call an ambulance if:

How can you help a child with epilepsy?

If your child has epilepsy, there are a few things that you can do to help them:

– First, learn as much as you can about the condition so that you can provide your child with the best possible care.

– Next, work with a team of doctors to develop a treatment plan that is right for your child.

– Finally, make sure that your child has access to all the resources they need, including support groups and educational resources.

On World Epilepsy Day, we encourage you to learn more about this condition so that you can provide your child with the best possible care. If you would like to learn more about first aid for epilepsy or you want to have a first aid refresher. Call us on 1300 642 427 or check out our available first aid course near you.